The title to this post pretty much says it all about Governor Jerry "Moonbeam" Brown and President Barack "Avatar" Obama.

Both have been sufficiently removed from reality by political ambition that we would expect them to actually favor grant programs to provide solar power to soup kitchens while pondering signing off on cuts in funding for meat.

Reality is the story headlined Most of the unemployed no longer receive benefits explaining:


The jobs crisis has left so many people out of work for so long that most of America's unemployed are no longer receiving unemployment benefits.

Early last year, 75 percent were receiving checks. The figure is now 48 percent — a shift that points to a growing crisis of long-term unemployment. Nearly one-third of America's 14 million unemployed have had no job for a year or more.

...Their options include food stamps or other social programs. Nearly 46 million people received food stamps in August, a record total. That figure could grow as more people lose unemployment benefits.

Even if there are people "gaming" the system, these numbers clearly tell us a serious problem is developing.

By the time you add in those who have never drawn unemployment such as unemployed recent high school and college graduates (and drop outs), we are allowing a huge expansion of the number of our people who are poor by late 20th Century American standards.

First, green industry is not going to fix the problem of employment in California no matter how much people might want it to be the universal solution for everything: 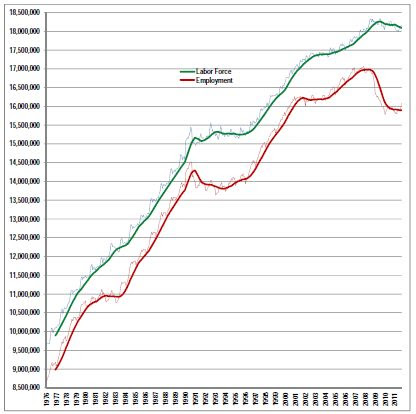 Second, despite the machinations of Moonbeam's Administration, the California State Budget will be seriously out of balance by June.

The Great California Slump is not going to be fixed by creating solar powered soup kitchens. (Yes, there is such a thing - see Sun powers Tucson soup kitchen.)
Posted by Michael O'Faolain - at 3:31 PM