In addition to declaring 2010 a turnaround year for the region, the report from the Silicon Valley Leadership Group found optimism going forward: Most CEOs expect their companies to boost hiring in 2011 as well....

"So 2010 was a comeback year for Silicon Valley," said Carl Guardino, president and CEO of San Jose's SVLG, a nonpartisan public-policy group. "We've bounced back from the doldrums of 2008 and 2009."

KGO TV in it's report noted:


...Two-thirds of the companies indicated they added jobs in 2010 and 55 percent of them say they will hire even more people to work in the Valley in 2011. The majority of them hired from one to 100 employees last year.

One single company, Google, is expected to lead the way with its announced plans to add about 6,000 jobs this year. However, to put this in perspective, there are two million unemployed people in California....

At least David Louie at KGO tried to offer some perspective.

On Saturday, the Chronicle reported that Governor Moonbeam visited the group:


Brown was met by a standing ovation from the crowd of CEOs in the Silicon Valley group, which was the first major business organization in California to back his budget plan.

Carl Guardino, who heads the organization, repeated his group's support of Brown's efforts and said business leaders welcome his attempts to address pension and regulatory reforms.

Brown said he has heard some valuable ideas from the group. In a panel discussion with Facebook Chief Operating Officer Sheryl Sandberg, Brown was asked about the group's recommendation that he appoint a "job creation" point person in his administration to help tackle the state's 12 percent unemployment rate.

"It's a good idea; it's in very active consideration," Brown said, adding that his administration is recruiting for the post.

The fact is that the CEO's and their organization do spin well. Governor Moonbeam and President Avatar visit these folks regularly. They extol the virtues the preeminent R&D center of late 20th and early 21st Century technology, biotechnology, and genetics.

And indeed, the San Francisco/San Jose region is such a center. It can support 200,000 well paid permanent R&D jobs and another 400,000 direct support personnel. Add to that everyone who sells stuff to or provides services for these people -medical personnel, government service employees, and restaurant wait-staff - and you could have a thriving community of 2.4 million with 1.2 million permanent workers.

The problem is we're talking about a population of 6.5 million with a workforce of 3.1 million. As noted, the R&D center creates and/or stimulates 1.2 million jobs. Another 1.6 million jobs have been created by other unrelated or marginally related activity, leaving the region still short about 300,000 permanent jobs.

The problem is that the R&D center will gear up again for the phone/tablet/app development and for cloud computing development, directly employ another 100,000 tech types over five years stimulating an additional 200,000 jobs, then dump the 100,000 and more because the profits have been siphoned off. No benefit accrues to the venture capital community nor the Wall Street investment community by creating long-term manufacturing jobs in the region. This creates wild boom and bust cycles that are of no benefit to the State of California budget so long as it remains heavily dependent on income and sales type tax revenues.

Apparently Moonbeam and the tech CEO's are going to create one more job - the post of "Job Czar" in the Governor's Office. Unfortunately, the best thing the Job Czar could tell these folks is to quit hiring now in order to avoid a continuation of this: 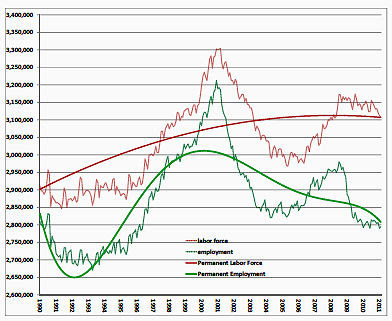 I understand that will never happen. Governor Moonbeam and President Avatar have to cater to get funds for elections.

But essentially that venture capital and investment community are leeching off the workforce that absorbs the impact of the boom-bust cycle.

And it keeps the State from creating a stable government and school system.

There is a reason the number of employed persons in the Bay Area is the same as it was in 1990.

Only the profits going to investors are real. Half a million workers will be in turmoil because the new jobs aren't real. There will never be more people employed than the 3.2 million at the end of 2000 by remaining dependent upon folks like the members of the Silicon Valley Leadership Group and the politicians who think like them.

Couldn't California politicians at least double the unemployment insurance premium this time around knowing that these leeches are going to put half a million workers out on the street as soon as those workers generate some more wildly high profits for them?
Posted by Michael O'Faolain - at 11:22 PM