The sky is falling; California might have to pay with IOU's...again.

As federal and state regulators shut down four banks Friday, the State of California is not looking so good either.

This week the California Supreme Court allowed the Gubernator to order 144,000 state workers to take three days of unpaid furloughs each month. State Controller John Chiang said that the state is running out of cash and might begin issuing IOUs within two weeks because the Legislature has not adopted a budget for the fiscal year that began July 1.


"I must be clear that this year's looming cash crisis is fundamentally different than last year's," Chiang explained in aa speech Wednesday. "Importantly, the fiscal crisis we face this year is 100 percent political, and the only thing standing in our way is the absence of leadership."

Uh, someone should have commented it's always been political, John. We have a mostly inexperienced Legislature because of voter mandated term limits and the voters mandated a two-thirds vote in both the Senate and Assembly to approve a budget knowing the Republicans would likely always hold slightly more than a third of the seats in each house. It's an election year. It's politics. We don't have a State budget and we probably won't have one until after November.

That's the situation in Sacramento. Meanwhile, back in reality the federal survey data for July came in and according to it, we lost 25,102 jobs and added 89,916 to the workforce showing a "seasonally unadjusted" unemployment rate of 12.8%. During the four weeks of July, the Employment Development Department reported that 314,142 initial unemployment claims were filed compared to the 155,188 filed during the same four weeks in 2006.

Looking at the actual number of people who have jobs as indicated by the federal survey and the EDD report, we can establish that the job loss since the 3rd quarter of 2008 looks something like this and we can project a trend (click on the graph to see a larger version): 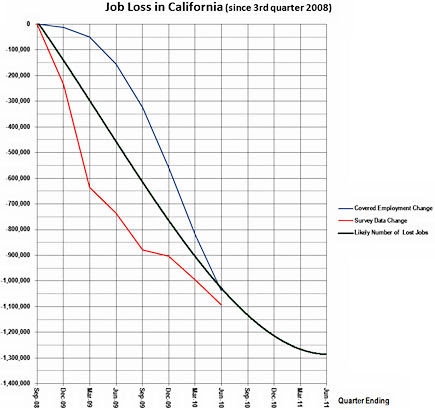 Unfortunately, the state's economy has bottomed out which means State General Fund revenue hasn't bottomed out.

It appears we will have lost 1.3 million jobs by June 2011 resulting in further loss of income and sales tax revenue. So what on Earth makes anyone think they can project a budget that doesn't involve "slash and burn" cuts to schools, welfare, and health care and significant tax increases?

Or is the plan just to sit back and run out of money? Like we have in prior years.
Posted by Michael O'Faolain - at 11:53 PM