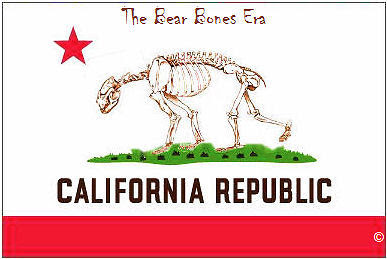 California's Great Recession likely will begin "in earnest" in July 2009. And unfortunately for the Obama Administration and the world, what was the world's 8th largest economy will drag everyone else down with it.

It was in a July 2009 post that I suggested calling it "The Great California Slump" in recognition of the fact that California has its own economy, simultaneously integral to and separate from the U.S. economy.

The fact that seems hard to grasp is that the employment level in California is the same today as it was in the period from 2000-2002. In my opinion it will remain at that level through 2015. California is in a depression comparable to that of the mid-1930's.

The only difference is that a "safety net" of extended unemployment insurance and other economic subsidies reduced the immediate impact on individuals. Also federal "stimulus" programs such as the August 2009 "Cash for Clunkers" program and the home buyer's tax credit slowed the overall economic slump.

But we are now seeing a fear of deficit at the federal level that apparently will result in many of the programs ceasing which will further depress the California economy. One shouldn't underestimate the impact these programs had.

Sales of new homes collapsed in May, sinking 33 percent to the lowest level on record as potential buyers stopped shopping for homes once they could no longer receive government tax credits.

...Analysts were startled by the depth of the sales drop.

"We all knew there would be a housing hangover from the expiration of the tax credit," wrote Mike Larson, real estate and interest rate analyst at Weiss Research. "But this decline takes your breath away."

Reporting on the same data, the Los Angeles Times noted: "Sales in the West were down by more than half."

And now comes The Great California Slump: Phase 2. Consider this comment by UC Berkeley business school dean Laura Tyson, a top economic official in the Clinton administration who is on the short list to become President Obama's budget czar:

Deep cutbacks by state governments such as California have all but obliterated the effect of the nearly $800 billion federal stimulus enacted last year....

As the State reduces its purchases of supplies, equipment, and services from the private sector and starts laying off employees whose families stop spending, the multiplier effect will put more private sector workers on the unemployment roles. This will result in reduced sales tax and income tax revenue which will increase the State budget deficit.

What has happened is that the government of the State of California has hit a brick wall because it is now clear there isn't enough money flowing in the economy. As noted by one observer:

The governor has a state budget that his fellow Republicans more or less support. Assembly Democrats have a budget whose centerpiece is a complex scheme to borrow billions of dollars. And Democratic senators have a budget that's based on raising taxes and shifting some programs from the state to counties.

...The two Democratic versions of the budget are very much at odds, even if they both agree on rejecting Gov. Arnold Schwarzenegger's slash-and-burn approach to closing a $19.1 billion deficit.

Moreover, Attorney General Jerry Brown, the Democratic candidate for governor, has declared that the massive borrowing envisioned in the Assembly plan probably would violate a 2004 balanced-budget ballot measure.

It is easy to blame ineffective and irresponsible government. But even when I'm doing so, I am fully aware of something recently noted by another observer explaining a recent study:

In the paper, Inman tests factors in states' budgeting practices, politics and economies in order to figure out which correlates most heavily with their economic conditions. The runaway winner is unemployment. "States with a one standard deviation higher rate of unemployment (10.0%) will have a budget gap which is $222/person more than a comparable state with an unemployment rate one standard deviation lower than average (6%)," he concludes. Inman finds this to be a cheering prospect: "The good news from this analysis is that the states’ fiscal crises of 2009 do not appear to be linked to any obvious structural or institutional failures in state finances. It’s the economy."

A few other points from the paper: The states that have survived the recession best are not states with more competent governments. They're states that depend on natural resources – Montana, Nebraska, North Dakota, Texas, West Virginia, and Wyoming – for revenue. Budget cuts, as you might have expected, have hit aid to local education and transfers and services for lower income families hardest. And the stimulus covered, at most, 23 cents of each dollar of state budget gap -- and that's running out this year.

In other words, it may be fun to denigrate our politicians or to point to states that seemingly do it better because they have a different tax structure, but the fact is the more a state and the local governments and schools in each state depend on income and sales taxes rather than income from taxes on natural resources and real property, the worse its budget problems.

Of course, our politicians are deserving of criticism.

Confronted with the current situation, the Legislature didn't even try to meet the June 15 budget deadline and the joint committee working on the budget adjourned for awhile because they can't figure out how much money they have to spend in the next six months.

Meanwhile, in March the Senate passed a proposal sponsored by California Forward that would require the governor to submit a two-year budget plan and a five-year fiscal outlook to the Legislature in odd-numbered years beginning next year.

Really? The Legislature and the Governor have been adopting and significantly revising the state budget every six months for several years now, but someone thinks they can adopt a two-year budget and make serious five-year fiscal projections.

I know, I know, we need all those great business planning practices that will avoid the problems.

But who, again, was the person who in early 2006 offered the projection that in 2009-10 taxable sales would be 16%+ lower than in fiscal year 2006-07, taxable personal income would be 20%± lower than it was in 2006-07, and the Corporation Tax income would be 17%± lower than it was in 2006-07? If no one would have put that in the five year plan, doing the plan would have been an exercise in futility. Worse yet, if the Governor had put that in the plan, he would have ceased to perform a critical role for the State - head cheerleader for our economic outlook.

The Great California Slump: Phase 2 is going to be a worsening of the economy combined with a weakening of the "safety net" at both the federal and state level. And California is not alone. Here's a map of the states this year showing those with deficits in red, the darker the red the worse the problem: 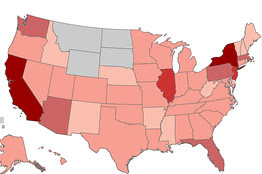 The federal government does need to recognize the depth of the problem. California, New york, Illinois and New Jersey, the four darkest on this map, contain 25% of the nation's population. If you add in the next tier, Florida, Pennsylvania, New Jersey, Washington, Arizona, and Connecticut, 43.5% of the American population located in 10 states will be seeing major cuts in state, local government, and school employment and purchasing and/or tax increases beginning July 1.

This will severely impair any national economic recovery, perhaps delaying a recovery for a decade. And it could cause significant numbers of Americans to experience economic stress not seen in this country for 80 years.

In any event, absent some remarkable strategy implemented in the next three months The Great California Slump: Phase 2 is about to begin.

From an AP news article on line as of around 8 pm EDT tonight headlined Republicans kill Senate jobless aid measure:

The rejected bill would also have provided $16 billion in new aid to states, preserving the jobs of thousands of state and local government workers and providing what White House officials called an insurance policy against a double-dip recession....

The demise of the bill means that unemployment benefits will phase out for more than 200,000 people a week. Governors who had been counting on federal aid will now have to consider a fresh round of budget cuts, tax hikes and layoffs of state workers.