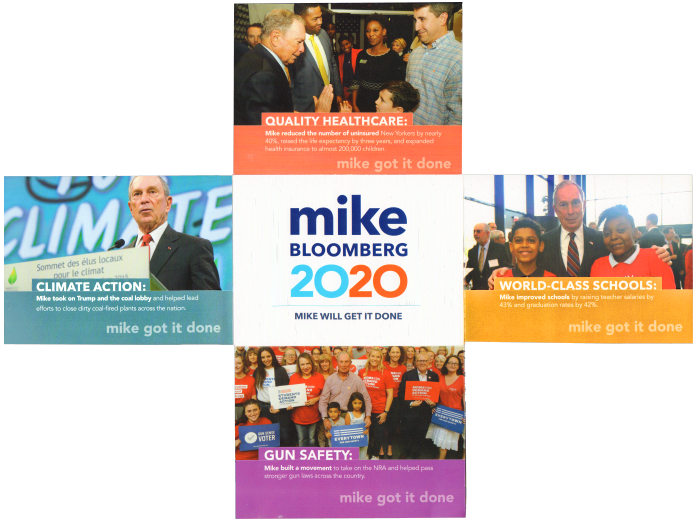 Bloomberg is on the ballot. Apparently he's for Quality Healthcare, Climate Action, World-Class Schools, and Gun Safety. So am I. And he says he "got it done." Hmmm

Regarding "Gun Safety" Bloomberg is the founder of Everytown for Gun Safety. Per Wikipedia:

Regarding the statement about his role as New York's Mayor in "Quality Healthcare" the best review is that in PolitiFact's Bloomberg on health care: Translating his mayoral record to the national stage.

We also have the statement about his role as New York's Mayor in "World Class Schools" including "raising teachers salaries 43% and graduation rates 42%." Regarding graduation rates and claims about minority students, the best review is that in PolitiFact's review which set the meter at mostly true. Regarding teachers salaries, one source explains:


No one drew Bloomberg’s ire more than the United Federation of Teachers. At first, he worked collaboratively with the union, arriving at a contract agreement well ahead of schedule that boosted base pay by 43 percent. The longest-serving teachers could now earn more than $100,000.
But that was the last contract they agreed to. Moving forward, virtually every piece of Bloomberg’s agenda stoked outrage from the teachers union, which he once likened to the National Rifle Association.
He proposed a simple eight-page contract to replace the UFT’s doorstop-sized agreement, pushed for merit pay — a third rail for the union — and mused about firing half of the city’s teachers.

Further if you Google StudentsFirstNY Bloomberg you can read more about Bloomberg's education policies.

Essentially, Bloomberg has a defensible record regarding Quality Healthcare, Climate Action, World-Class Schools, and Gun Safety. No other Democrat running in the Democratic primaries has any kind of record on these and other subjects that even approaches that of Mike Bloomberg. That, of course, is a potential problem because Bloomberg held the top position in a government providing a myriad of services and policies to 8 million diverse people and therefore made some mistakes.

In The Philadelphia Inquirer this week the national opinion columnist Will Bunch expressed his frustration he and other lefty ideological Democrats are feeling regarding Mike Bloomberg.

Before discussing that, it should be made clear that in January Bunch indicated his intention "to vote for Warren when the primaries come to Pennsylvania in late April, because I think she’d be a tad better than Sanders at getting progressive things done and because I see my vote as a statement against the fear and misogyny that grip America."

Ironically, in the article linked above Bunch wrote how unfair it was for pundits to compare Sanders with Trump just because both are catering to the more ideologically committed populist wings of their respective parties.

In this week's article he compares Bloomberg to Trump in campaign style because Bloomberg is spending money in a sophisticated way which is leading to a time when "all future presidents will be decided by who has the hippest Instagram memes or the cruelest Twitter putdowns, paid for either by the obscene personal wealth of sweatshop capitalism or by selling out to the highest bidder, even if that’s a foreign adversary like Russia." In using "sweatshop capitalism" Bunch clearly lets his commitment to anti-capitalist leftist ideology take over.

And yet, Bunch offers us this:


But Bloomberg seems to be playing chess while the other Democrats are jumping slowly around a checkerboard, one square at a time. In the large March primary states where Bloomberg is first competing, he’s already moving into the lead — with a lot of room for growth if Biden, who was the front-runner in these states, continues to fade and if those Facebook, radio and TV ads keep coming. He already leads in Florida, a big state that votes March 17, and in Arkansas, one of a number of March 3 Super Tuesday states where Bloomberg has been campaigning while the other Democrats clubbed each other in Iowa and New Hampshire.
His campaign’s unconventional late-entry strategy has so far kept him off the debate stage, where Bloomberg would have to defend his record as mayor and businessman, while swamping the ad market where he fully controls the message. And — contrary to the conventional wisdom of House Speaker Nancy Pelosi and other moderate Dems that voters only want to hear about health care — Bloomberg’s message is what folks really want to hear, which is getting in the face and under the skin of their tribal enemy, Trump.
Last week, Bloomberg probably gained five more points in the polls by giving it back to the president — who’s been tweeting a lot about his former golf partner, calling him “mini Mike” even though Bloomberg isn’t that short — and attacking him on Twitter as a “carnival barking clown." Even some who’ve been cynical about the (real) billionaire’s campaign cheered his New York chutzpah. Maybe Democrats don’t really want to talk about Pell grants; they just want to see The Apprentice crushed in the November sweeps.

I don't know about other Democrats, but for this writer Bunch is correct that we experienced Democrats "just want to see The Apprentice crushed in the November sweeps." Beating Trump is all there is when looking at the Democratic primary candidates.

It is foolishness to make choices on such things as Presidential candidates talking about Pell Grants, a federal grant program for college students named for U.S. Senator Claiborne Pell (RI),. Virtually no on knows if and when significant changes can be made to college funding because it is Congress - Representatives and Senators hence Pell's name on the program - that establishes and funds such programs, not the President.

It's not that this writer intends to vote for Bloomberg on March 3. It is a decision that need not be made until March 3.
Posted by Michael O'Faolain - at 10:03 PM