Fear is rising over the Coronavirus. Stock markets are falling. Hey, humanity, what about the flu??? 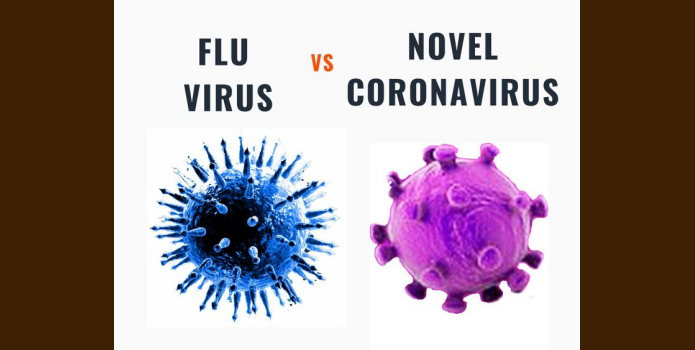 Current data show that the COVID-19 Coronavirus (aka Novel Coronavirus) outbreak world-wide includes 80,423 cases and 2,712 deaths. There are currently 49,775 infected patients being treated. 9,211 of which are deemed serious or critical.

This is a disease for which the world does not have vaccinations and is learning what treatments have positive outcomes. While it appears to have a 3.4% death rate, in fact we have no idea how many people have contracted the disease resulting in relatively minor symptoms.

As reported in the New England Journal of Medicine on February 18, 2020, a group of predominantly German nationals who had stayed in Hubei Province was evacuated to Frankfurt, Germany, on February 1, 2020. To make  a long story short, 114 passengers without symptoms agreed to voluntary testing and two were found to be infected. The two were isolated. While a faint rash and minimal pharyngitis were observed briefly in one, both patients remained well and without a fever 7 days after admission.

So far, the evidence indicates that like many, many viruses the Coronavirus can be carried in the human body without resulting in illness. We really have no idea how many people have picked up the virus and developed no or negligible symptoms and how many developed some symptoms but thought they had a cold and recovered without fanfare. So we don't know what the death rate is.

The Chinese government has taken comparatively drastic action to limit the spread of the COVID-19 Coronavirus outbreak which appears to have begun in China. They have received accolades for their efforts.

The result will place a significant stress on the country's economic system as many businesses have had to shutter leaving them without revenue from which they can make payments on debt. Last month, China’s banking and insurance regulator asked banks to provide extra support – such as extending loans – to entities and individuals that were helping combat the coronavirus. Within a month the banking system will threaten the stability of the financial system.

So far this week the U.S. stock markets have taken heavy losses blamed on the COVID-19 Coronavirus outbreak.

All this has to make one wonder. What about the flu???

At this point in the 2019-2020 flu season in the United States, influenza has made more than 26 million Americans ill. About 250,000 have already been hospitalized and at least 14,000 people have died.

World-wide each year depending upon which viruses become pandemic, 290,000 to 650,000 people die from seasonal influenza infections. This figure corresponds to 795 to 1,781 deaths per day due to the seasonal flu.

Humans have strange behaviors. Every year 500,000± humans die of the flu. About 14,000 have died in the U.S. so far this flu season. Nobody shuts down businesses and whole communities because of the flu. The stock markets don't respond to flu statistics. But we humans appear to be having a panic over the COVID-19 Coronavirus. It seems weirdly disproportional.

This is not to say we should ignore this new virus. People are dying of Coronavirus infections.  If one is part of your life, the virus represents a tragedy in your life. 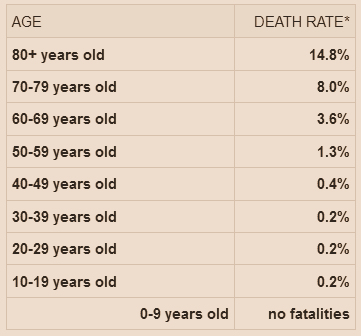 Even for those 80+ years of age who become ill enough from the virus to need treatment, only 15% die. The report also offers death rate numbers based upon preexisting conditions: 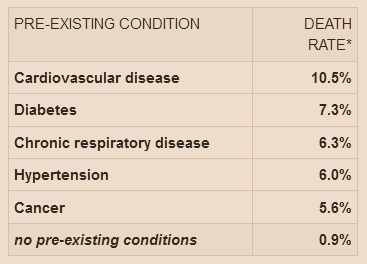 Being a senior citizen, this writer assumes a high correlation between those over 70 and those with preexisting conditions.

Obviously we should take extreme measures to minimize the spread of the virus. Or should we? Might not those who become infected, with or without symptoms, develop an immune system response we need? Of course, not becoming infected is preferable assuming a vaccine is developed.

But shutting down the economy has its own implications, including some deaths. It is a dilemma. Fortunately we have Donald Trump responsible for any decisions.