Ignorant pro-tariff Republicans gave us The Great Depression and the carnage and devestation of WWII. The voting public loved them in 1929.

Almost a century before Trump, the League of Nations' World Economic Conference met at Geneva in 1927. Its final report stated: "the time has come to put an end to tariffs, and to move in the opposite direction." Nonetheless, a Republican Congress led by Reed Smoot and Willis C. Hawley locked the world into a nationalist economic agenda. The Tariff Act of 1930, commonly known as the Smoot–Hawley Tariff Act, was the second highest tariff increase in United States history.1

In the 1928 presidential election, soon-to-become-President Herbert Hoover (who had never held an elected office!) promised to help farmers by increasing tariffs on imported agricultural products. After winning, Hoover asked Congress to implement his promise. 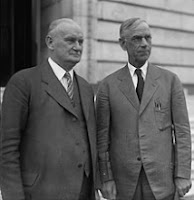 Willis Hawley (left) and Reed Smoot in
April 1929, shortly before the Smoot–
Hawley Tariff Act passed the House.
Photo from Wikipedia
Reed Smoot was a Republican from Utah and chairman of the Senate Finance Committee. Willis Hawley, a Republican from Oregon, was chairman of the House Ways and Means Committee. Four months before the 1929 economic crash beginning The Great Depression, in May 1929 with Hawley leading the way the House passed a bill increasing tariffs on both agricultural and industrial goods. With The Great Depression under way, the Senate debated its bill until March 1930 when it adopted its version. A conference committee unified the two versions, largely by raising tariffs to the higher levels in the House bill. The bill was signed by President Herbert Hoover on June 17, 1930.

Some statistics from around that time seem as if they might be related to the Smoot–Hawley Tariff Act:

President Franklin Delano Roosevelt and the Democratic Congress passed Reciprocal Trade Agreements Act of 1934. But retaliation by other countries and the further growth of nationalism around the world had its continuing impact. U.S. unemployment remained above 15% until WWII when about 16 million Americans began serving in the U.S. military out of about 85 million of working age. With about 20% of the work force in the military, the need to expand war related production resulted in an unemployment rate below 2%  in 1943 through 1945.

History does not literally repeat itself, common belief notwithstanding. Trump did not implement his tariffs at the beginning of a depression. But nationalism has a way of ending up in economic disruption and war. It's just difficult to predict what events will occur that will impact the world and how trends will exacerbate or ameliorate the impact of those events.

What we do know Climate Change, more correctly viewed by humans as a global climate crisis, is occurring. As noted in previous posts, agencies of the United States government and the Chinese government have accepted as inevitable a near-maximum catastrophic impact from Climate Change. A May 2018 Chinese study corresponds to July 2018 official projections accepted and published by the Trump Administration.

Climate Change is not the only trend with significant potential to exacerbate or ameliorate the impact of future events. As noted in the previous post, "space-based economies" are evolving around the world with varying mixes of private sector and national governments participation.

Donald Trump pushed for, and got, a Space Force in the American military. Of course the Chinese People's Liberation Army has both a rocket force – the strategic and tactical missile operator – and a strategic support force, which is in charge of cyber, space, and electronic warfare. (Fortunately, neither chose to name a military branch Starfleet.)

One thing we should know. In a world threatened by a climate crisis resulting from world-wide human behaviors and with nations establishing space warfare military branches in the context of private sector expansion into space, nationalism is even less desirable and more dangerous than it was when Hoover, Smoot, and Hawley pretended they understood what was best for the next decade.

Even the right-wing conservative Washington Examiner noted; "The Trump administration is scheduled to raise tariffs on Chinese imports on Sunday to rates not seen since the notorious Smoot-Hawley tariffs enacted in 1930."

History does not literally repeat itself, but....