The peculiar politics of this pandemic election year: can Democrats make the changes needed for safety? 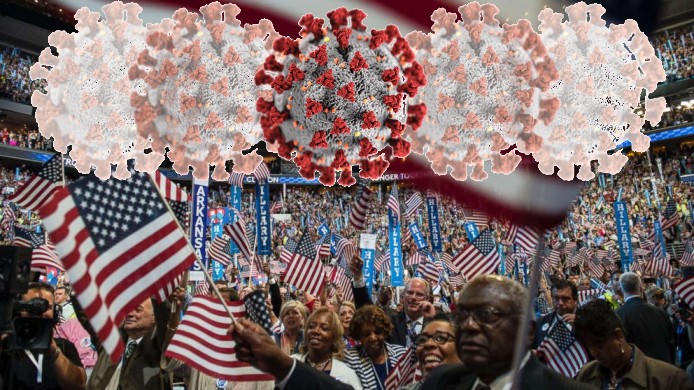 Having a pandemic in the Spring of a Presidential election year is unprecedented. The test for the Democratic Party is how to make the required changes in their plans in order to keep people safe.

And that doesn't mean having Joe Biden live stream in response to Trump. It means proving the Party is an organization capable of making decisions in a time of emergency.

You see, there's the problem of the 2020 Democratic National Convention now scheduled for July 13-16 in Milwaukee. Convention leaders issued a statement Monday in which they said they are "exploring a range of contingency options" amid the coronavirus pandemic. The Wall Street Journal reported Sunday there were phone calls last week among organizers and groups involved in planning the event and that the options mentioned in the calls "included shortening the four-day convention by a day or holding a mostly remote event."

The problem facing Convention planners is the same facing the 2020 Olympics which is likely to be postponed to 2021. The federal government's plan (yes, they have one, and it is a well-designed plan) includes in its lists of assumptions: "A pandemic will last 18 months or longer and could include multiple waves of illness."

While that 18-month period for planning is a worst case scenario, July 13 is less than four months away. The outbreak was first identified in Wuhan, China, in December 2019. As of March 23, 2020, about three months later, China believes they have mostly blocked the spread of coronavirus within the country. This is the result of extreme "shelter-in-place" rules. But reportedly they are now looking at reinfections.

In less than four months, expected in Milwaukee for the convention from across the United States were up to 50,000 people and planners are looking for 15,000 volunteers to help with the operation. So the idea is to shorten the convention by a day? Really? That's a "plan" being discussed?

In the meantime, Donald Trump is able to dominate news cycles with the frequent updates on the pandemic. Joe Biden has announced he will be streaming from his home what has been called "shadow briefings."

However, the situation is more complicated than that. In addition to the pandemic - how badly did the Trump Administration handle it - there is the economic crisis resulting from the pandemic. How is that situation going to affect the voters a nation that is clearly as divided as the United States? What is it all going to look like at the beginning of October?

Sadly, Democrats in Congress are giving the appearance of bickering with Republicans over plans to address the economic impact of the pandemic. What should have happened last week is that Joe Biden should have stood on a stage with Senate Minority Leader Chuck Schumer and Speaker of the House Nancy Pelosi presenting an economic stimulus package to be introduced in the House. Instead, any delays which worsen the outcome will be blamed on the Democrats.

And, of course, Bernie Sanders just cannot step back giving the Democratic Party a chance with suburban housewives and blue collar workers in November. He and a bunch of liberals think an economic crash will be blamed on Trump. Trump's strategists are working hard to make sure that doesn't happen. So we Democrats are going to help them.

The big question is can the Democratic Party make the changes needed (a) to keep people safe and (b) to win?
Posted by Michael O'Faolain - at 2:14 PM