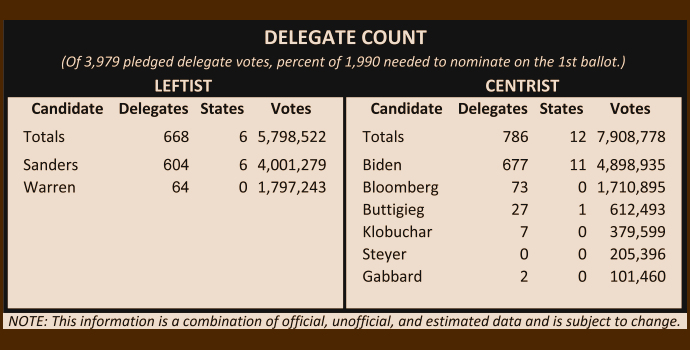 Members of the Electoral College select the President. Convention Delegates select the nominee.

As of Super Tuesday March 3, 2020, the fact that the Democratic Party is divided between the democratic socialist candidate Bernie Sanders and former Vice-President Democrat Joe Biden became obvious. All other significant centrist Democratic contenders, along with "lefty" Elizabeth Warren, are no longer competing with Biden in the primaries.

Contrary to the impression given in many headlines, in this writer's opinion California was not the win the Sanders team should have gotten given the amount of money and effort spent here. Saturday the LA Times article Bernie Sanders holds 2-1 lead in California, poll shows told us "Sen. Bernie Sanders has taken a commanding lead in California’s Democratic presidential race, ahead of his nearest rival by 2 to 1 and on track to win a majority of the huge trove of delegates at stake in the state’s March 3 primary, according to the final UC Berkeley Institute of Governmental Studies poll of the contest."

Indications are that the leftist side actually only won 46%± among California voters compared to 52%± for Biden, Bloomberg, et al.  However, because of the way delegates are allocated, the leftists will get 55%± compared to 45%± for the centrists.

Part of the problem for Sanders, of course, is indicated in the USA Today story Many young voters sat out Super Tuesday, contributing to Bernie Sanders' losses. Of course, Sanders is Sanders.

But even if one thinks comparing Sanders to Trump is all wrong, it's not the corporate and political establishment that gave Biden the Super Tuesday win. The Biden campaign was broke going into Super Tuesday, outspent by Sanders by a ratio of seven-to-one (and outspent by Mike Bloomberg by 100-to-1). The Biden campaign's skeletal presence on the ground was dwarfed by Sanders’ vast grassroots operation. It was not the establishment that turned out for Biden. It was African-American voters who backed him over Sanders by huge margins, along with suburban women. Meanwhile Sanders young voters turned out in lower numbers than in 2016.

It is telling that in the time of the coronavirus, The House and Senate, aka the political establishment, reached a deal on Wednesday to provide $8.3 billion in emergency aid to combat the novel coronavirus,  an amount substantially larger than what the White House initially proposed in late February. The money will be used by what's left of the denizens of the health bureaucracy "swamp" to produce treatments and vaccines to keep Sanders and Trump supporters alive.
Posted by Michael O'Faolain - at 12:23 PM