“The dogma lives loudly within you.” - Senator Diane Feinstein to Judge Amy Coney Barrett during Barrett's Court of Appeals confirmation hearing in 2017. 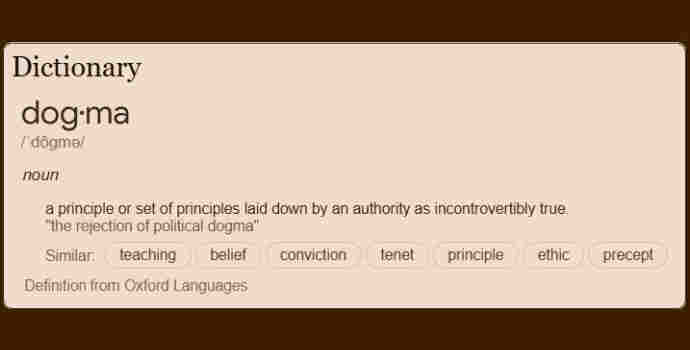 But what if none of this matters relative to what is important to American national economic and societal structure? What if, as expressed in The New York Times by Kochland author Christopher Leonard "Judge Barrett’s nomination is the latest battleground in [Charles Koch's] decades-long war to reshape American society in a way that ensures that corporations can operate with untrammeled freedom."

In a blog post here we have explored in great detail the Koch-funded Neoliberal political organization. In 1958, the father of the Koch Brothers and the Koch Network, Fred C. Koch, became a founding member of the John Birch Society, an American political advocacy group supporting limited government. Over the next 60 years, the Koch wealth has been used particularly by Charles Koch to achieve control of American government. The truth is that with Barrett's nomination Trump has cemented a Neoliberal majority view on the Court.

As noted in the blog post referenced above, the map below indicates which among the 50 U.S. states at the beginning of 2016 had 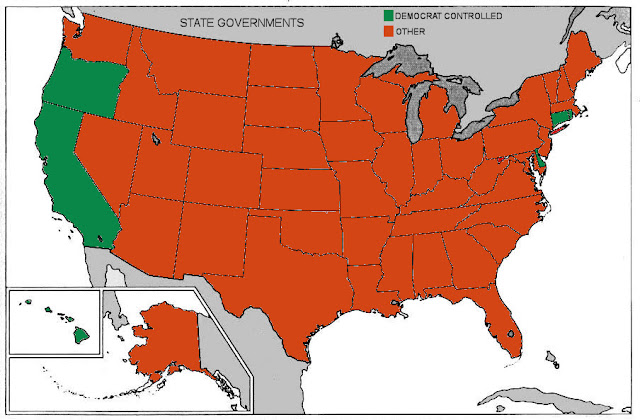 In fact, the shift from 1976 to 2016 within the important governments of the United States, the state legislatures, the Koch Network worked hard to bring about the following changes (the Nebraska unicameral legislature is supposedly non-partisan):

After gaining control of most state governments over a period of six decades, in 2016 Neoliberalism gained ideological dominance in the White House with the election of Mike Pence as Vice-President.

In 1991, Pence became the president of the Indiana Policy Review Foundation, a self-described free-market think tank and a member of the Neoliberal State Policy Network, a position he held until 1993.

More than half of SPN funding comes from DonorsTrust and its sister donor conduit Donors Capital Fund, the preferred funding vehicles of the Koch network of right-wing millionaires, billionaires, and foundations created to funnel money anonymously to network partners.

Pence won election to Congress then was elected as Governor. While Governor, in a televised interview appearance with Chris Matthews, Pence advocated eroding the teaching of science in public schools by putting religious dogma on a par with established science, accepting "creationist beliefs" as factual, and thus "teaching the controversy" over evolution and natural selection, and regarding the age of the earth, and letting children decide for themselves what to believe.

This, of course, brings us back to the issue of dogma in politics. In 1980 Charles Koch's brother, the late David Koch, credited the 1976 presidential campaign of Libertarian Roger MacBride as his inspiration for getting involved in politics: "Here was a great guy, advocating all the things I believed in. He wanted less government and taxes, and was talking about repealing all these victimless crime laws that accumulated on the books. I have friends who smoke pot. I know many homosexuals. It's ridiculous to treat them as criminals — and here was someone running for president, saying just that."

In other words, the Koch's are not conservative when it comes social issues. They simply want government totally out of business regulation and funding

Nonetheless, the Koch's have had to accept the dogmatic orthodoxy of Catholic fundamentalists and Christian evangelicals in order to advance their dogma in "these" United States (see maps above). If they must risk state laws on abortion rights, physician-assisted suicide, and gay marriage to "restore" unrestricted capitalism, so be it. In reality none of those laws would ever interfere with the activities of wealthy capitalists anyway.

Religion has a peculiar role in American history and politics. For instance, the Third Clause of Article VI of the Constitution states in part: "No religious Test shall ever be required as a Qualification to any Office or public Trust under the United States." Further, the First Amendment to the U.S. Constitution states: "Congress shall make no law respecting an establishment of religion, or prohibiting the free exercise thereof."

As perhaps half of 13 percent of Americans who know the year the U.S. Constitution was ratified are aware, the establishment of religion is a legal arrangement. It exists in Great Britain, Norway and other countries and existed in varying forms in many more countries in 1789, and in 10 of the original 13 colonies. One religion is designated as the official religion of the government. It is given preferential financial support by the government, which normally has a voice in the appointment of church officials. Frequently, the head of state must be an adherent of that religion.

The exclusion of non-Protestants from public office was practiced well into the 19th century. Disestablishment was not completed in Connecticut until 1818, in Massachusetts until 1833 and in New Hampshire until 1877. Keep that year in focus.

The Constitution forbids Congress to establish a national religion or even permit a religious requirement for someone to hold office. It also forbids congressional interference with religious practices. Or does it?

The year after 1877, in 1878, the U.S. Supreme Court, in Reynolds v. United States, ruled that a law against bigamy was not considered to be religiously discriminatory against members of The Church of Jesus Christ of Latter-day Saints (LDS Church), who were practicing polygamy up until 1890. The Court investigated the history of religious freedom in the United States and quoted a letter from Thomas Jefferson in which he wrote that there was a distinction between religious belief and action that flowed from religious belief. The former "lies solely between man and his God," therefore "the legislative powers of the government reach actions only, and not opinions." The Court determined that the First Amendment forbade Congress from legislating against opinion, but allowed it to legislate against action. Therefore, religious duty was not a suitable defense to a criminal indictment, religious actions could be regulated by law.

So ""Congress shall make no law...prohibiting the free exercise" of religion was interpreted to mean that the term "free exercise" was limited to holding an opinion.

Apparently in 1878 it was determined that Congress could regulate marriage practices. You see, the 14th Amendment only guaranteed religious civil rights by securing "the equal protection of the laws" for every person effectively prohibiting discrimination on the basis of religion.

But marriage laws, for instance, ostensibly don't discriminate on the basis of religion but rather on the "moral" preferences of the legislature. That puts gay marriage potentially back before the courts, as would the "right to life" put abortion and assisted suicide before the court.

If you find this confusing, you are not alone. It will be interesting to see what the Supreme Court will have to say about it all now that we've turned the Judicial Branch over to the American Catholic Church.

On the other hand, the Koch Network hopes it will result in enshrining their economic dogma.