In 1960 the debate was obviously misleading. Let's make 2020 the last year for Presidential debates. 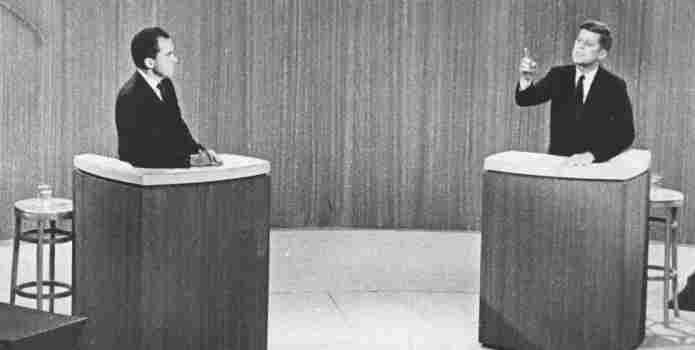 It's time to end the Presidential Debates.

The televised Presidential and Vice-Presidential Debates began in 1960 with the Kennedy-Nixon debates in 1960. It was in the second debate on October 7 that ABC's Edward P. Morgan asked Kennedy: "Senator, on Saturday you said you had always thought that Quemoy and Matsu were unwise places to draw our defense line in the Far East. Would you comment on that and also address to this question: couldn't a pullback from these islands be interpreted as appeasement?"

Clearly startled, Kennedy responded "Well, the United States has on occasion ... uh...." He then attempted to give in detail an explanation of the complex political geography of the situation while implying that the United States should only defend the islands if they were part of an overall attack on Taiwan itself. Nixon took the opening: "I disagree completely with Sen. Kennedy on this point." He went on to talk about freedom and the communists and our Nationalist allies. It was the single most important win in the debates for Nixon.

The very small islands of Quemoy and Matsu are part of a 19-island chain within artillery range of mainland China and 100 miles from Taiwan. Taiwan held these Chinese islands then and now. China wanted them back and it still does. What's important here is that this explanation is necessary because not one in ten thousand Americans would recognize the names Quemoy and Matsu because they disappeared from discussion after the 1960 election.


This writer was age 15 at the time of the debate. My reaction was: "What a simplistic waste of time."

In a 2016 post here The American Media Party Presidential candidate Donald J. Trump and the end of journalism a very shortened quote from Emmet John Hughes article 52,000,000 TV Sets--How Many Votes? published in the September 25, 1960, edition of The New York Times Magazine was offered. The following is a much longer quote:

lt is manifestly not true that a good debater clearly qualifies as a good President or, for that matter, as anything but a good debater. By way of analogy, the Washlngton press knows (without wishing to publicize the fact too clearly) that, as often as not, a good government officlal happens to conduct a poor press conference. while his mediocre colleague may happen to have a most felicitous talent for the occasion.
It Is perfectly true that a "debate" can be singularly revealing: a rude grimace, a brusque gesture, a hasty retort can suddenly color the whole event. But the discovery of one of these phenomena suggests a quixotic, if not reckless, test of capacity for high office.
And as for the great issues, the unfortunate fact is that far less skill is required to blur them to clarify them ("I have been concerned a great deal about that myself***. You have stated one point of view moat persuasively, but ***. Frankly, I once held that view myself, but***. There Is much to be said for what you have said, but I honestly think that a broader perspective ***.). If and when such smoke and fog films the natlon's television screens, only a most credulous people could imagine the wispy, curling clouds of words are magically golng to assume the shape and form of a nationa1 leader.
Will the revolution in surface method and technique, brought to political life by television make this lifegiving process more true and profound?
If it is imagined to serve not in the search for truth but as a substitute for truth; if it drives politics toward theatrics, so that the number of politicians who imagine themselves entertainers swells to match the number of entertainers who imagine themselves politlclans; if it ruthlessly practises a kind of intellectual payola that rewards the man who can reduce the most complex issue to the silliest simplification; if it effectively invites a whole people to foreswear the labor of reading for the ease of gaping; if the merchandising of tranquilizers and sedatives is imitated or surpassed by a concept of leadership that pits party against party, orator against orator, in rival stroking and soothing of the complacencies of the citizen; if the pungent slogan asserts such sovereignty that disarmament is discussed on the level of deodorants; if all impulses conspire to glut the channels with what sells rather than with what matters; if, by all these lapses and deceits, a whole people lets itself become mentally trapped 1n a suffocating kind of isolation booth from which no sound can be heard but the voice of the huckster - the answer will be no.
The final result will be dictated as with every great resource or device In the hands of a free people - be it fire, be it water, be it nuclear power. It will serve or it will damage - it will dignify, or it will degrade - as the wisdom and will of free men, fervent or feckless, decide.

Hughes' fears have materialized. The debate process serves only the broadcast media and the candidate most media-savvy, meaning having a shrewd understanding of how to deal with publicity and the media. In 1960 Hughes did not anticipate our device-laden world. But in 2016 a reality show host, Donald Trump, proved that the debate process is a loser for America.
Posted by Michael O'Faolain - at 4:52 PM