"Societal Paperlessness" - Could Covid-19 actually cause a major reduction in the use of paper? 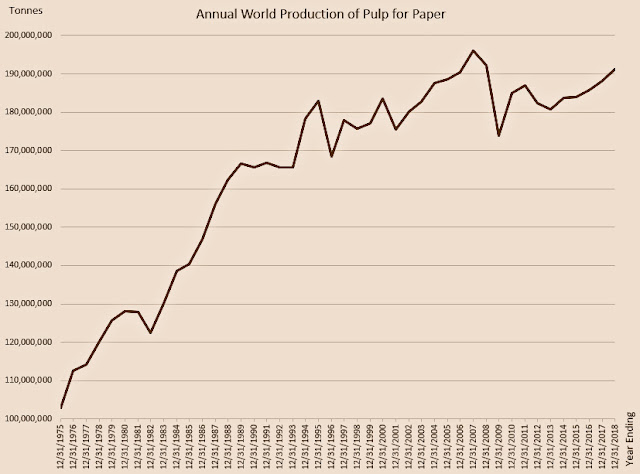 In a recent story Wisconsin's paper mills are the latest victim of the pandemic we learn that the Wisconsin Rapids Mill was closing citing figures indicating that the demand for printing paper fell 38 percent year-over-year in April and research indicating an even greater plunge to come.

Paper. Could it become a significant part of the Extended Economic Distortion? From this writer's perspective...an old computer guy...we shouldn't even be here.

In 1975 the head of Xerox Corp.’s Palo Alto, CA Research Center George E. Pake noted in a Business Week article that by 1995 the typical business will be paperless and employees will have a TV-display terminal with keyboard sitting on their desks.

He explained: “I’ll be able to call up documents from my files on the screen, or by pressing a button. I can get my mail or any messages. I don’t know how much hard copy I’ll want in this world.”

In 1978, University of Illinois professor Frederick W. Lancaster in Toward Paperless Information Systems reinforced the idea that humans would through technology reduce or eliminate the use of paper.

The chart above based on data from the Food and Agriculture Organization of the UN indicates just how accurate the forecasts of the 1970's  were. Since Pake made his observations the volume of paper used worldwide since 1975 has increased 85%. Of course, on a per capita basis, from 1975 through 2018 the use had dropped, though by a mere ½%.

The graph above indicates that drops in paper production do coincide with recessions. Between 2007 and 2009, production plunged 11%.

But then again, "paper" isn't really a single product. For instant, the Great Economic Lockdown of 2020 resulted in a crash in the sale of commercial toilet paper while people stuck at home vied for a roll of the softer, cushier home-use toilet paper.

During the Covid-19 Crisis service businesses such as salons have eliminated magazines, as have airlines. With their employees working from home, other businesses have stopped ordering copy paper.  While there has been some increase in packaging paper sales to online retailers, indications are that many of those catalogues that go directly from our mailbox to our recycling can may not arrive this fall.

This kind of change isn't new to the paper manufacturing industry. In the 1930s Wisconsin Rapids Mill became the sole manufacturer of the stock used to print Life magazine. But things have changed.

While the per capita sales of paper products may have kept pace with population growth, the fact is that much of the growth was outside the U.S., much in third world nations  From 1990 to 2003, while its Gross Domestic Product doubled China’s consumption of toilet paper alone increased at an average annual rate of 11%. The market for household papers generally has more than doubled in the past ten years. However, in 2016 China ended requirements for retaining business accounting records in paper form which is also true for the IRS in the U.S.

The fact is most books, magazines, financial transactions, written communications, etc. are in electronic format. Some are also on paper form. But with the broad use of "devices" we can expect to see less use of paper. (At least until the electronic world experiences its own Covid-19 outbreak.)

Many significant changes in day-to-day activities that we cannot predict will come out of the Covid-19 crisis, initially as a part of the Extended Economic Distortion. As noted in the article about the Wisconsin Rapids Mill:


“It impacts the 900 employees directly in the plant,” said Missy Hughes, secretary and CEO of the Wisconsin Economic Development Corporation. “But the important thing to keep in mind is that the plant purchases and processes 25 percent of the timber coming off of Wisconsin’s land. That impacts the haulers who are bringing the wood to the plant, it impacts the loggers who are cutting down the wood, and then it affects the landowners.
“In Wisconsin, 2.4 million acres of managed forest is owned by counties, and they use the proceeds of the sales to fund their government operations,” Hughes said.

And, of course, that doesn't take into account the local businesses that serve the affected employees and their families.

All because of paper.
Posted by Michael O'Faolain - at 4:05 PM