“POTUS is doing APEC!” Somehow we have fallen back into 20th Century foreign policy attitudes.

This year's APEC forum follows the signing on Sunday of  the world’s biggest free-trade pact, the Regional Comprehensive Economic Partnership (RCEP), sealing an agreement that excludes the United States.

RCEP was going to be the subject of this post.

The signing of the RCEP after eight years of negotiations ties together one-third of the world’s population and global economy, and is projected to add US$186 billion to the world economy through improved regional trade among Australia, Brunei, Cambodia, China, Indonesia, Japan, Laos, Malaysia, Myanmar, New Zealand, Philippines, Singapore, South Korea, Thailand, and Vietnam.

The Comprehensive and Progressive Agreement for Trans-Pacific Partnership (CPTPP), signed in 2018 by Australia, Brunei, Canada, Chile, Japan, Malaysia, Mexico, New Zealand, Peru, Singapore and Vietnam. Soon after taking office in 2017 President Donald Trump withdrew the United States from the Trans-Pacific Partnership (TPP), the predecessor to the CPTPP and effective isolated the United States.

Note that Australia, Brunei, Japan, New Zealand, Singapore and Vietnam are signatories to both agreements which gives us a map: 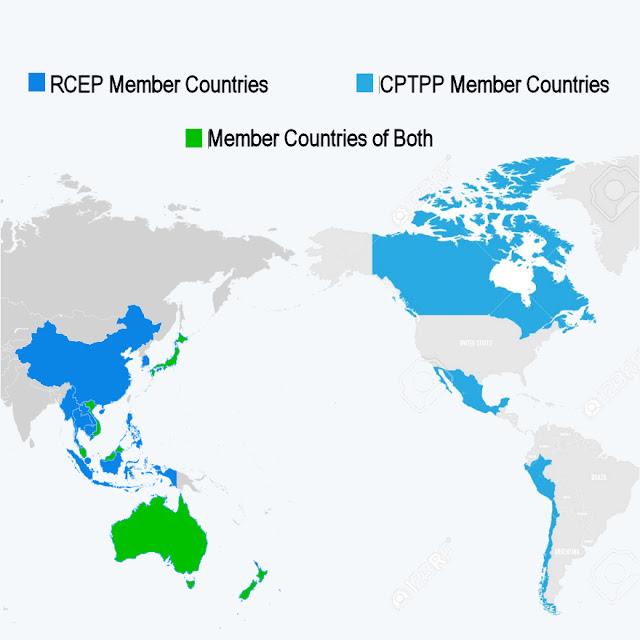 Trump, of course, just lost reelection. In that context, along with the signing of the RCEP and CPTPP which between them include all the members nations of APEC except Papua New Guinea, Russia, Taiwan, and the United States, it seems problematic that he would attend the annual APEC meeting even if it is only virtual.

But it shouldn't be a surprise. As Trump is about to leave office, the Republicans of the Senate Foreign Relations Committee Chairman Idaho Senator Jim Risch issued a lengthy report Wednesday stating that the best strategy for the US to counter China with its “shifting” challenges is to partner with allies in Europe.

At the beginning of its conclusion, the report states: “The United States and Europe on the one hand, and China on the other, have very different visions of what the world should look like." Note that the map above is Pacific-centric, that Europe and the Atlantic are not included. Here's the cover of the report (click on it to download the full report): The map on the cover effectively says it all, but just in case it offers the word "Transatlantic."

The November 9, 2020, post here is titled It is dangerous for Americans to ignore the emotional depth of 20,000 continuous years of Chinese history and 2,250 years of government. In that post it is noted: "It has become clear in the past few years that leadership in the U.S. government, including the military, has a twisted view of the Chinese brought about by an ideological adherence to the term 'democracy' despite the fact that even Wikipedia acknowledges that 'no consensus exists on how to define democracy.'"

In an August 5, 2019 post here titled They literally think differently from us. And their patience with Trump's economics just ran out. it is noted: "If you didn't already know it, the Chinese think differently from us. And by that, I don't mean they have different opinions about the acting in 'Spiderman: Far from Home', I mean the way their brains process interactions with the world around them and the people in their lives is different because of 20,000 years of continuous linguistic and cultural evolution."

To further aggravate all of this, on Tuesday Axios reported in Scoop: State Department to release Kennan-style paper on China that the U.S. State Department's Office of Policy Planning was set to release a blueprint for America’s response to China’s rise as an authoritarian superpower. Follow its release, the official Chinese Foreign Ministry's response was: "The document is another anti-China lie concocted by Cold War fossils from the US State Department. It fully exposes the deep-rooted Cold War thinking and ideological prejudice of some people in the US, and also exposes their fear, anxiety and unhealthy mentality about China’s continuous development."

The difficulty in formulating a policy on China is perhaps best reflected in Inter-Parliamentary Alliance on China founded by well-meaning members of national legislatures on June 4, 2020, the anniversary of the 1989 Tiananmen Square protests. They see a need to assert a defense of the values of Western Democracy against the Chinese Communist Party. And in their minds the best defense is a good offense.

The problem is "offense" becomes "offensive" in the minds of many Chinese whose 2,250 years of autocratic government seem just fine. Care has to be taken to present the benefits of a more open society in a persuasive manner. Most importantly, having an Atlantic-centric arrogance is simply a loser approach.

That Donald Trump of New York/Florida is going to participate in the Asia-Pacific Economic Cooperation annual forum tomorrow should be of some concern for those of us who are Pacific-centric.