Trump is still winning 2020. Why don't Democrats understand the basics of the U.S. government?

I don't really think that focusing on the 2020 Presidential race is a good idea for Democrats. Nonetheless, it is already a focus of the press.

It is interesting to watch the various Democratic politicians throw their proverbial hats into the 2020 Presidential election ring. And it's fun to ruminate about that election in the context of Donald Trump's disapproval rating in the polls.

Various headlines indicate polls showing that Donald Trump has at the national level a 40%±  approval rating and a 56%± disapproval rating. So a good, lefty Democrat has a chance to beat him in 2020. Right? Not really.

(If you don't understand that it doesn't matter what the nation-wide majority thinks, please read the post When your government is not now and never has been a democracy, you are a United States citizen.)

Here's the lineup of surprising states in which he currently has a majority "disapproval" rating that he will have to campaign in to find enough Electoral Votes to win: 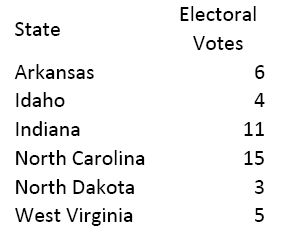 The inverse of that is that the Democratic nominee should have the potential to win a sufficient combination of those states to prevent Trump from getting his 12 Electoral College votes.

Of course, Trump currently is not "disapproved" by a majority of those polled in states like Ohio and Florida. A Democrat might win those states thereby beating Trump.

But if the Democrats nominate a candidate that cannot win in any of the listed states of Arkansas, Idaho, Indiana, North Carolina, North Dakota and West Virginia, then that candidate is not going to have an easy win against Trump absent a major event casting a negative light on Trump.

Then again, Democrats could go "all in" on the preferences of their reliable policy-oriented base located in California and New York and not worry about how to win Arkansas, Idaho, Indiana, North Carolina, North Dakota and West Virginia against Trump. And Trump could win.

At some point it's got to start bothering Democrats that a reliable 40%± of Americans approve of Trump if only because the structure of the U.S. government requires occasionally winning in states like tiny Wyoming where Trump has a 64% approval rating - you know, the 573,720 folks in Wyoming who have the same number of U.S. Senators representing them as the 37,253,956 folks in California.
Posted by Michael O'Faolain - at 1:18 PM