If you think the resistance to, the downright refusal to, mask-up and social distance to protect fellow Americans is un-American, history says your wrong

What is the student but a lover courting a fickle mistress who ever eludes his grasp?  - William Osler

One truth about being a student of human history is that no truth is fixed in meaning but rather changes over time. Human behavior can only be assessed in the context of events which frequently are the outcome of the behavior of other humans. Assigning meaning to history is thus at best speculative as we are likely to discover new evidence creating new context. And, of course, what we see as evidence offered may only be what we prefer to see.

The year 2020 will be regarded as historically significant. As noted in The Economist Only the world wars have rivalled covid-19 for news coverage which was determined after comparing the mention of key words in their own editions beginning in 1843 and the New York Times beginning in 1851. But while the word "war” appeared in 53% of The Economist articles in 1915 and 54% in 1941 and 39% of New York Times articles in 1918 and 37% in 1942, the words "Covid-19" or "coronavirus" has appeared in the The Economist and the New York Times in 47% and 46% of the articles respectively this calendar year including January and February. 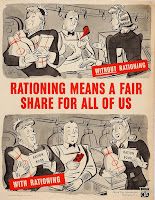 The two world wars and the Spanish flu of 1918, along with numerous famines and genocides, resulted in far more deaths. Within the United States in WWII daily life was disrupted by numerous regulations such as the ration stamp requirement for food. restrictions on the purchase of tires and gasoline, and the temporary end of all civilian automobile sales. Air Raid Wardens were appointed and tasked ensuring that communities were pitch black at night to avoid becoming bombing targets, assuring that people responded to air raid drill sirens, and preparing for the prospect of a toxic gas attack.

But unlike today, Americans in WWII embraced their patriotism and conformed without complaint. Yeah, right. Ironically in June of just last year, well before we ever heard of Covid-19, Politico Magazine in How World War II Almost Broke American Politics let us know:

...During the war, the country remained beset by racial and ethnic animosities that pitted Protestants against Catholics, Catholics against Jews and white Americans against people of color. Partisan rancor posed a steep barrier to the extreme measures that mobilization required: mass taxation, rationing, wage and price fixing, conscription, and surveillance. The business community sharply resisted the shift from civilian to military production. Organized labor loudly demanded its share of wartime prosperity. Even as the country fell in line with this vast expansion of state authority, outwardly uniting behind the war effort, discord boiled just beneath the surface, revealing itself in violent homefront outbursts and acid displays of political demagoguery.

1942: Nearly a year after the Japanese raid on Pearl Harbor that brought the United States fully into World War II, the Americans get around to imposing nationwide gasoline rationing

A fuel shortage was not the problem. America had plenty of that. What it lacked was rubber. Both the Army and Navy were in desperate need of rubber for the war effort.

Mandatory gasoline rationing had been in effect in the eastern United States since May 1942, but a voluntary program in other parts of the country had proven unsuccessful.

The Baruch Rubber Report, presented to President Franklin Roosevelt on Sept. 1, 1942, concluded that the United States was "a have-not nation" when it came to rubber. Meeting the military's enormous needs would be nearly impossible if the civilians at home didn't cut out nonessential driving to conserve on tire wear.

Proving it could remain obstinate even in the face of a national crisis, Congress balked at imposing nationwide gas rationing. Forcing Americans to curtail their driving would be bad for business, many legislators argued. They evidently feared voter backlash more than they did Hitler or Hirohito.

They pushed for a delay at the very least, but FDR would have none of it. Backed by government procurement agencies and military leaders, the president ordered gasoline rationing to begin on Dec. 1 and to last "the duration."

Thus, Americans soon became acquainted with the ration card, which had to be presented on every trip to the filling station. To be out of ration stamps was to be out of luck.

Drivers who used their cars for work that was deemed essential to the war effort were classified differently and received additional stamps. There were five classifications:

The last three classifications were not subject to the restrictions.

The griping didn't stop, not in Congress and not on Main Street, USA....

Neither of the writers could have anticipated the Covid-19 pandemic along with the complete failure of the Trump Administration to tackle the instantly unpopular task of protecting the lives of American citizens. But those writers likely weren't surprised. They could have easily imagined the kind of resistance to not killing other Americans we have seen.

And if you think that is harsh, keep in mind that a lack of resources put WWII American soldiers - the husbands, sons, grandsons, brothers and boyfriends of grumbling members of Congress and citizens on Main Street - at extreme risk.