In a post here on July 7, 2018 titled More is at risk than abortion and gay marriage: California must protect itself from the rise of "A Handmaid's Tale" theonomist judiciary the subtle risk of the current and future Supreme Court makeup was extensively noted. We will not repeat that long post, but rather refer readers to it while offering the following chart: 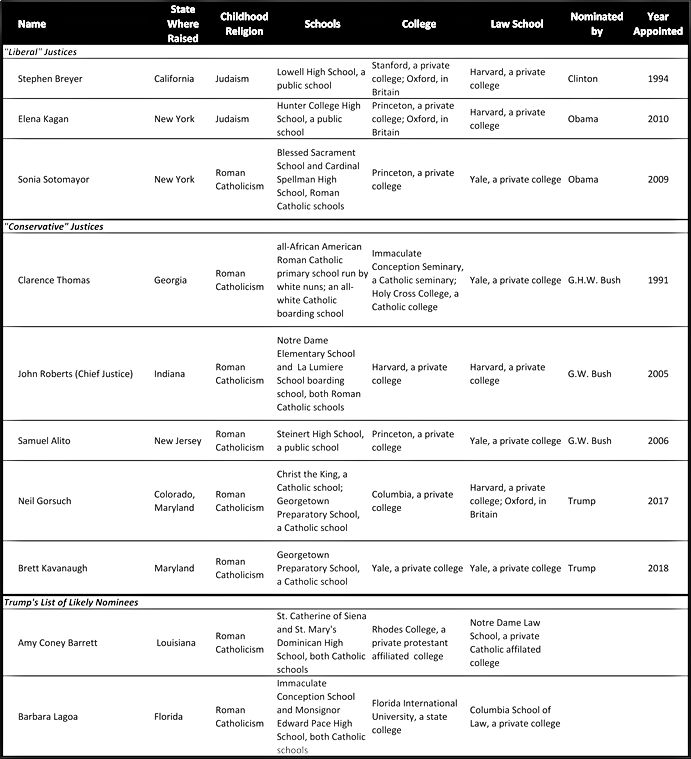 Contrary to everything I understand about religion vis-à-vis the Judicial Branch within the Union is reflected in this from Wikipedia:

Of the 114 justices who have been appointed to the court, 91 have been from various Protestant denominations, 12 have been Catholics (one other justice, Sherman Minton, converted to Catholicism after leaving the Court). Another, Neil Gorsuch, was raised in the Catholic Church but later attended an Episcopal church, though without specifying the denomination to which he felt he belonged.
At the beginning of 2010, Justice John Paul Stevens was the sole remaining Protestant on the Court In April 2010, Justice Stevens announced his retirement, effective as of the Court's 2010 summer recess. Upon Justice Stevens' retirement, which formally began on June 28, 2010, the Court lacked a Protestant member, marking the first time in its history that it was exclusively composed of Jewish and Catholic justices. Although in January 2017, after seven years with no Protestant justices serving or nominated, President Donald Trump nominated Neil Gorsuch to the Court, as noted above it is unclear whether Gorsuch considers himself a Catholic or an Episcopalian.
This development led to some comment. Law school professor Jeffrey Rosen wrote that "it's a fascinating truth that we've allowed religion to drop out of consideration on the Supreme Court, and right now, we have a Supreme Court that religiously at least, by no means looks like America".