People are considered dangerous by geese and they will protect their families and friends from people. The geese pictured above are visiting a Northern California beach where there are so few people during the Covid-19 pandemic that they feel comfortable strolling around. The geese are wise.

By crowding a Southern California beach, the human beings in the picture below have chosen to risk killing someone - a family member, a friend, a coworker, somebody sometime in the near future. 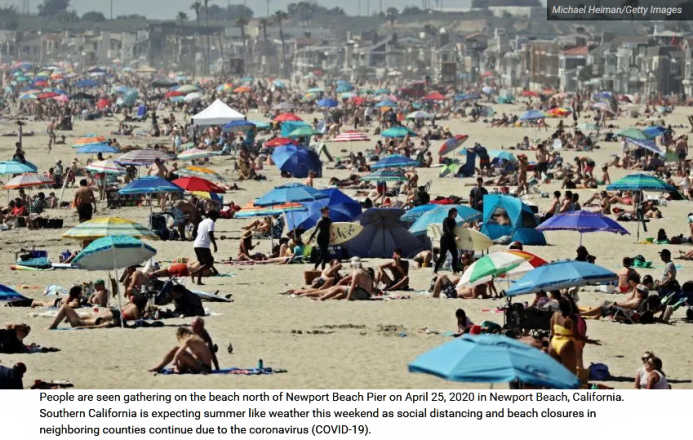 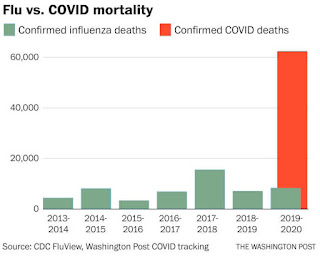 Some would argue that the risk of killing someone is overstated in the paragraph above the picture, that it's no more dangerous than the flu. When it comes to Covid-19 what you don't know can kill you. And there is much people don't know. 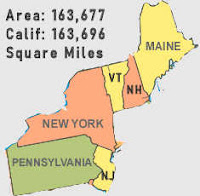 What Californian's need to understand can be illustrated. The map to the left represents an area of the Northeast U.S. that is approximately the same geographical size as California though it has a 10% larger population. To date, there have been 52,632 confirmed cases of Covid-19 in California. Within the area on the map, there have been 497,287 confirmed cases. Even adjusting for that extra 10% population there have been 8.5 times as many cases in the area on the map than in California. Someone (or many someones) needs to be given some credit for that startling difference. While some might want to say "we're Californians, that's what we do", in fact careful research and hard decision-making by state and local government leaders created this level of positive results. 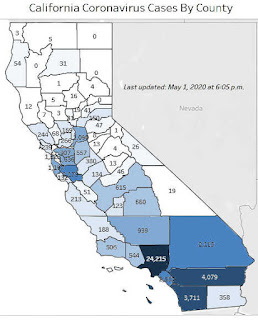 On March 15, 2020, while explaining the challenges of creating a plan for school closures, California Governor Gavin Newsom said: “We have to meet the needs of all our diverse communities in a nation-state with six-plus million children.” In fact, in the school year of 2018-19 California had 6,186,278 students in 1,037 school districts with 10,521 schools. In fact, California has more school students than 33 states have total population. But we only have one governor.

It's the end of Week 7 in California's Great Economic Lockdown of 2020 and plans to unlock or "reopen" are being discussed (click image to read the article): 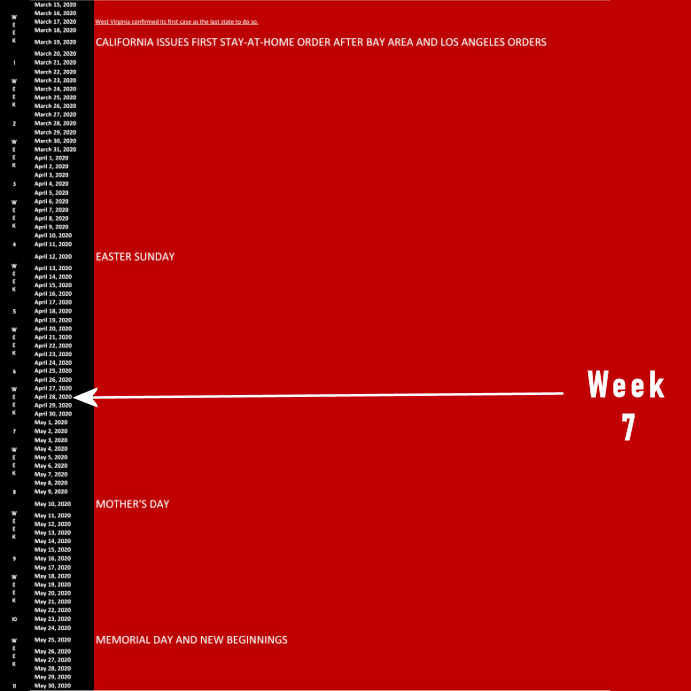 Here in this blog we projected that Week 11, Memorial Day week, California would begin reopening. Newsom is hinting that some loosening of the rules might come sooner. Still, the dominant reliable measurement regarding the Coronavirus Crisis is the list of important facts we don't know about Covid-19. Despite that absolute truth, elected officials are under tremendous pressure from constituents and protesters pushing to end the Great Economic Lockdown of 2020. As can be seen from the news, it isn't simple: 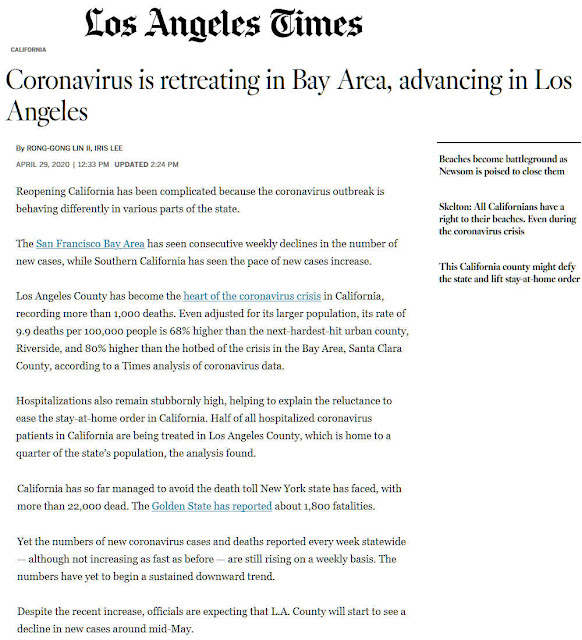 The most visible protesters are only slightly more ignorant about pandemics than their dogs. A second group includes those behind the scene with power and influence whose real religion is the worship of money and who are crassly merciless believing that humans are just nameless machines feeding labor into the all-important economy.

The fact is we have no idea what the risks are because, we are still at the beginning phase of the pandemic and the sustainability of our economic, social and public life over the next two years depends entirely on the adults in the room not behaving like puppies with short attention spans and a need for immediate gratification.

Regarding children, the news reports regarding the sudden presentation of Kawasaki disease among children began to appear the day the states of Georgia, Texas, Michigan, Hawaii and Alaska started reopening without have that knowledge to consider. At this point we have to remind ourselves about Texas politicians.

"No one reached out to me and said, as a senior citizen, are you willing to take a chance on your survival in exchange for keeping the America that all America loves for your children and grandchildren? And if that's the exchange, I'm all in," Texas Lt. Gov. Dan Patrick said on Fox News on March 23.

Patrick said he wanted to save the economy for his six grandchildren. It's unclear what his position would be if it meant one would die and two would be disabled from heart damage, so that three could have a better economy. But it appears that many like him would find that acceptable or would chose to understand it as well as their dog.

But the point is no one, including Patrick, has the knowledge needed to make a decision to broadly reopen that all important economy. Unless, of course, they find perfectly acceptable to risk the killing and/or disabling thousands of people from infants to centenarian in order to pocket some dollars a few weeks earlier than everyone else.

A week ago Bill Gates...you know him, the guy who predicted this pandemic in a TED2015 talk, published an 11-page memo The first modern pandemic: The scientific advances we need to stop COVID-19 in which he notes:


The coronavirus pandemic pits all of humanity against the virus. The damage to health, wealth, and well-being has already been enormous. This is like a world war, except in this case, we’re all on the same side. Everyone can work together to learn about the disease and develop tools to fight it. I see global innovation as the key to limiting the damage. This includes innovations in testing, treatments, vaccines, and policies to limit the spread while minimizing the damage to economies and well-being.
This memo shares my view of the situation and how we can accelerate these innovations.The situation changes every day, there is a lot of information available—much of it contradictory—and it can be hard to make sense of all the proposals and ideas you may hear about. It can also sound like we have all the scientific advances needed to re-open the economy, but in fact we do not. Although some of what’s below gets fairly technical, I hope it helps people make sense of what is happening, understand the innovations we still need, and make informed decisions about dealing with the pandemic....
During World War II, an amazing amount of innovation, including radar, reliable torpedoes, and code-breaking, helped end the war faster. This will be the same with the pandemic. I break the innovation into five categories: treatments, vaccines, testing, contact tracing, and policies for opening up.Without some advances in each of these areas, we cannot return to the business as usual or stop the virus. Below, I go through each area in some detail.

It is a well-written, informed memo that deserves to be read by anyone who really wants to know how to live with the economic future of the world, particularly the next year or more that will be what Gates refers to as "semi-normal."

In this writer's opinion, too many pundits talk about the economic situation in terms of a recession or even a depression. The problem is mankind has never before seen an economy like the economy of the first two decades of the 21st Century. So we have never seen a reaction to a radical pandemic-based shift during such an economy.

“It is impossible to overstate the pain that people are feeling now and will continue to feel for years to come,” Gates warns us

The reaction is likely to lead to an Extended Economic Distortion, not a "great" recession or depression. Mistrust, a general sense of unease, is likely to be felt by most people. And the real meaning of "people" in this context is "consumers" whose spending drives the worldwide "consumer economy" which in the United States represents about 70% of economic activity.

All of which leads back to the fact that California had the worlds fifth largest economy prior to the Coronavirus Crisis of 2020. As a native Californian, this writer embraces Newsom's "nation-state" description. That very description is at the core of California's economy. Our technology and agriculture sectors depend upon immigrant labor and international trade, both strongly dependent upon movement of goods and people across our southern border and the Pacific Ocean.

How exactly California's economy will recover from the shock of  California's Great Economic Lockdown of 2020 if constrained by continuation of nationalist, anti-immigration, anti-trade policies of a reelected Trump Administration in an Extended Economic Distortion is difficult to determine.

In the meantime it's Week 7. Memorial Day is in Week 11. Californians can surely wait so that we can learn how to minimize the impact on people from infants to centenarian. But with that said, it is likely that we will see recurring localized or regional Covid-19 epidemics.
Posted by Michael O'Faolain - at 11:15 PM