Ignore economists. The number of people without wages will far exceed The Great Depression peak, and it's about the human struggle not economics. 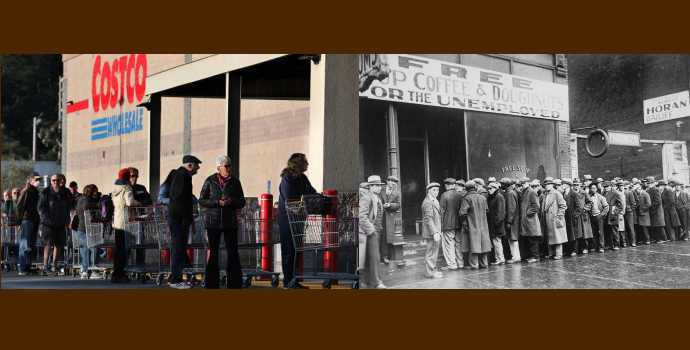 Until March 2020 the United States has never had a depression within a consumer economy heavily dependent on international trade. Now we are in the Covid-19 Depression which has no precedents to offer economists data for statistical models.

Economists are noting that the unemployment percentages are climbing to as much as half that of  the Great Depression.

A comparative review of the current economic reality seems necessary.

In 1932 the United States was in the depths of the Great Depression with some 15 million people unemployed.

If you have been hiding in a cave over the past two months, you may have missed headlines like this ’No words for this’: 10 million workers file jobless claims in just two weeks.

The story tells you that "more than 6.6 million U.S. workers filed new claims for unemployment benefits last week, on top of 3.3 million a week earlier, marking unprecedented devastation across the labor market." What it doesn't tell you is that the U.S. Bureau of Labor Statistics reported that there were already 5.8 million unemployed at the end of February.

So, let's word the truth as simply as possible:

Unfortunately those current numbers are not complete. As the article notes:


Additionally, the number doesn't capture self-employed workers, who are not eligible for state unemployment benefits....
Also left out of the count are people who left the workforce voluntarily for any reason — including to care for a sick family member, a child home from school, or because they are sick, themselves, from Covid-19, the illness caused by the unique coronavirus.

In other words, the Covid-19 pandemic has already resulted in more Americans looking for income-producing work than there were in the depths of the Great Depression.

Economists have a different take as noted in a Market Watch story: "The soaring U.S. unemployment rate might not match the peak of 25% seen during the Great Depression of the 1930s, but it could come uncomfortably close in the next few months."

In addition to the pandemic cause, the issues are more complex. Today we have Unemployment Insurance, Medicaid and Medicare, Social Security ,and numerous "public assistance" programs that didn't exist in any form in 1932. Today we have the federal government about to send to taxpaying adults $1,200 each (and $500 per each kid in the family). And today we have the federal government making emergency loans to small businesses, some even forgivable.

Still, we need to take note of the observations in Life for the Average Family During the Great Depression;


The Great Depression (1929-1939) was the worst economic downturn in modern history. The preceding decade, known as the “Roaring Twenties,” was a time of relative affluence for many middle- and working-class families. As the economy boomed, new innovations allowed for more leisure time and the creation of a consumer society. But the economic depression that followed those boon years profoundly affected the daily life of American families, in ways large and small.

Even the affluent faced severe belt-tightening.

Four years after 1929 stock market crash, during the bleakest point of the Great Depression, about a quarter of the U.S. workforce was unemployed. Those that were lucky enough to have steady employment often saw their wages cut or their hours reduced to part-time.
Even upper-middle class professionals, such as doctors and lawyers, saw their incomes drop by as much as 40 percent. Families who had previously enjoyed economic security suddenly faced financial instability or, in some cases, ruin.
The average American family lived by the Depression-era motto: “Use it up, wear it out, make do or do without.” Many tried to keep up appearances and carry on with life as close to normal as possible while they adapted to new economic circumstances.
Households embraced a new level of frugality in daily life. They kept kitchen gardens, patched worn-out clothes and passed on trips to the movies as they privately struggled to retain ownership of a home or automobile.

Maybe we need to understand what, in narrative form, was the Great Depression. Consider this description:


The Great Depression was the worst economic downturn in the history of the industrialized world, lasting from 1929 to 1939. It began after the stock market crash of October 1929, which sent Wall Street into a panic and wiped out millions of investors. Over the next several years, consumer spending and investment dropped, causing steep declines in industrial output and employment as failing companies laid off workers. By 1933, when the Great Depression reached its lowest point, some 15 million Americans were unemployed and nearly half the country’s banks had failed.

Obviously here in the 2020 Covid-19 Depression we are facing a bad economic depression across the whole world, not just the industrialized world. Though it started with a pandemic, within six weeks we have had a stock market crash. Right at the moment consumer spending has crashed, production has shut in many industries, retailers and service businesses have closed, and the companies laid off the workers. We already have over 15 million Americans who are unemployed. So far the banks have not failed and the hope is that portions of the economy can begin to recover this Summer.

But unlike in the Great Depression, we have a consumer economy based heavily on international trade. Consider this from the South China Morning Post:


On Tuesday, the Port of Wuhan, a vital cog in China’s heavy industry supply chains, reopened for business after more than two months of being locked-down at the centre of China’s initial coronavirus outbreak.
In the same week, Ethiopia closed its land borders, Myanmar cancelled all commercial flights and South Africa restricted cargo movements to non-essential goods, joining the United States, Canada, Mexico and most of Europe in deploying draconian containment strategies aimed at stopping the virus’ spread.
It was a case of one door opening and 50 slamming shut. This winding down of international connectivity is set to paralyse global trade, the effects of which can already be viewed through a number of early indicators, and advance governmental statistics.

These drops were in February when manufacturing and shipping from China were shuttered. As of March we know that there has been a huge decline in retail sales in the United States which will/has resulted in a major decline in orders.

As noted in the previous post, hopefully sometime between Memorial Day and Labor day states will  be able to lift business closure orders and "shelter-in-place" orders allowing a "new beginning" for the American economy. But we don't know yet if that will be possible as there is even discussion of a second wave. (For more on that possibility there is the Forbes more alarmist story The U.S. May Be Heading To A Second (Or Even Fourth) Wave Of The Coronavirus Epidemic. Here’s What That Means and the more tempered NPR story Researchers Fear A 2nd Wave Of COVID-19 In China.)

Simply, in the coming months within the U.S. economy a human struggle will occur which will create data for future economists to study but which will be uncomfortable-to-tragic for the rest of us to experience and to remember, particularly for members of the Millennial and GenZ generations.
Posted by Michael O'Faolain - at 12:37 PM