Thunberg is right. Americans are more focused on "money and fairytales of eternal economic growth" despite the efforts of some to bring about change.

Simply it is unconscionable that the majority of voters in over half the states support state governments that have abandoned the children. Consider this map: 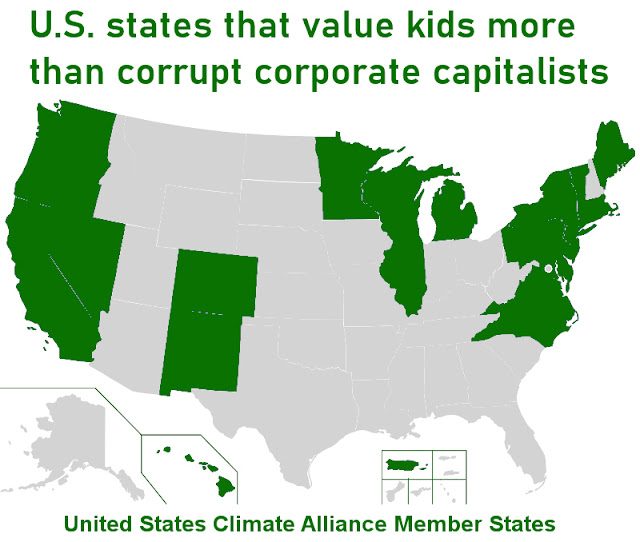 The U.S. Climate Alliance was founded in 2017 jointly by Washington Governor Jay Inslee, New York Governor Andrew Cuomo, and California Governor Jerry Brown. At the time Brown noted: "If the President is going to be AWOL in this profoundly important human endeavor, then California and other states will step up,"

As of July, twenty-four (24) of our states plus Puerto Rico and American Somoa have become members.

On the other hand the voters of 26 states - which in 2016 produced 58% of the U.S. carbon dioxide emissions with only 45% of the population of the states - have chosen to adhere to the Trump point-of-view that corrupt corporate capitalists are of more value than their own children and grandchildren.

On behalf of his voters, California Governor Gavin Newsom, the leader of the World's 5th Largest Economy, is actively challenging the leader of the World's Largest Economy, Donald Trump. With his millions of supporters Trump has simply abandoned all responsibility for addressing Climate Change thus failing to protect the next generations of Americans.

At the opening ceremony for Climate Week Newsom made California's position clear with regard to the Trump Administration's actions rolling back federal environmental policy: “I don’t know what the hell happened to this country that we have a President that we do today on this issue, because it’s a damn shame. It really is. I’m not a little embarrassed about it — I’m absolutely humiliated by what’s going on.”


The new governor took advantage of the international stage to reinforce California‘s position as a climate leader, giving credit to Republicans and Democrats who held the office before him. During each news conference, panel and speech, Newsom reiterated a sober warning that California’s road ahead won’t be easy.
“Most of the what and why has been accomplished,” he told The Times before walking onto the floor of the U.N. General Assembly. “This is all about application. This is all about implementation.”
Former Gov. Arnold Schwarzenegger, a Republican, laid the foundation for the state’s cap-and-trade program, which requires companies to buy permits to release greenhouse gases into the atmosphere.
Under [Former Gov. Jerry] Brown, the state set bold goals to slash emissions 40% below 1990 levels by 2030 and generate 100% of the state’s retail electricity from renewable sources by 2045. Recent polls from the nonpartisan Public Policy Institute of California show that more than two-thirds of adults in California support the policies.

Brown, of course, famously declared last year that California would launch its “own damn satellite” as the federal government receded from global climate commitments. And while in New York Newsom was following up per Newsweek California Governor Newsom and Michael Bloomberg Announce Plan To Use Satellite To Track Climate Change:


Governor Gavin Newsom of California and philanthropist and former New York City Mayor Michael Bloomberg have announced a new initiative that will use satellite data to monitor climate change in California.
The duo, along with Planet, an Earth-imaging company based in San Francisco, made the announcement Wednesday at the third annual Bloomberg Global Business Forum in New York. The event was held on the heels of the United Nations Climate Action Summit in the same city earlier this week.
Officially called Satellites for Climate Action, according to a press release from Bloomberg Philanthropies, the project "will bring together governments, philanthropists, environmental groups, and technology companies to use satellite technologies to monitor greenhouse gas emissions and turn satellite data into actionable information."

Newsom was among six governors from the U.S. Climate Alliance conferring with presidents, prime ministers and foreign government officials responsible for climate issues. The Alliance was formed in 2017 after President Trump announced his plans to withdraw from the Paris climate change accord. It has grown to include the leaders of 24 states and Puerto Rico.

But California has taken on Trump's policies with vigor. After all California, among the 50 states, ranks as:
Were it a sovereign nation among 207 nations, California would rank as:
Californian's simply cannot accept the conservative view that the private sector will take care of the Climate Change problem, someday, somehow, to the benefit of some but not others. Trump's policies are not exactly coherent but they do support the conservative view. The table below compares that view to the view that has evolved beginning with Schwarzenegger which has created the California Green and Gold Deal.


The California Green & Gold Deal includes a myriad of State programs and policies which can be viewed by clicking on the various links below.

Californians do understand that this is an imperfect effort that keeps evolving, beginning in 2006 with California’s Global Warming Solutions Act signed by Schwarzenegger and extended in 2017 (see Brown, Schwarzenegger Celebrate Extension of Cap and Trade). (It's worth noting that this week it was reported that Schwarzenegger offered to lend is electric car to 16-year-old climate activist Greta Thunberg.)

Californians have given The best poll (so far) for Gov. Gavin Newsom of his first year in office. A significant part of his 60% job approval rating (69% for voters under age 30) is his Climate Change activism.

Still, it is troubling that Washington Governor Jay Inslee, a Climate Change activist and one of the founders of the U.S. Climate Alliance, could not gain traction as a Democratic Presidential candidate. Then again, I guess it shouldn't be surprising. Of the first four 2020 Primary or Caucus states, three are not Alliance members - Iowa, New Hampshire, and South Carolina.  You will, of course, continue to read who is ahead in those states. And the National Democratic Party will continue to support the old candidates who are leading by discussing such things as health care costs and income inequality, along with AOC's really bad Green New Deal.

And because of those states we will fail to meet Greta Thunberg's standards: "People are suffering. People are dying. Entire ecosystems are collapsing. We are in the beginning of a mass extinction. And all you can talk about is money and fairytales of eternal economic growth. How dare you! For more than 30 years the science has been crystal clear. How dare you continue to look away, and come here saying that you are doing enough, when the politics and solutions needed are still nowhere in sight."
Posted by Michael O'Faolain - at 3:58 PM